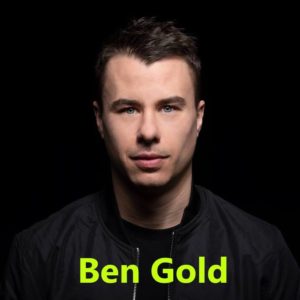 Gold by Name Gold by Nature, so let’s not talk about fiction and let’s focus on the facts… Ben Gold is one of the most prolific artists of his generation and at the tender age of 26 his sound transcends continents, performing across the globe from Miami to LA from Australia to Ibiza, with main room appearances at sell out events such as Bal en Blanc in Montreal, the prestigious ASOT celebration parties, Global Gathering, Creamfields and becoming the newly crowned resident of The Gallery held at the biggest super club in the World, Ministry of Sound.One of the most accomplished and skilled studio engineers in the business, his versatile ability casts a net far and wide with some of the most established employing his craft trade to define their unique sound.It all begun at the age of 15, self taught and highly motivated it took Ben just one year for his first original material to be signed to the biggest compilation of the moment “Trance Nation”. The industry began to sit up and take notice with leading albums such as the biggest selling European compilation “Dream Dance” snapping up his work to feature alongside some of the most established and respected producers from across the spectrum.It was clear to see a star in the making winning acclaim from luminaries such as Paul Oakenfold who signed him direct to the indelible Perfecto imprint and the UK leg of his Album tour, quoting “Ben Gold is a talented young producer and definitely one to watch out for in the future”…Fast forward 10 years to 2012… Gold is signed to the formidable Gareth Emery’s Garuda and with releases on Armada, High Contrast, Discover, Musical Madness this progressive and still young star has accelerated to upper echelon of the trance world.Ben continues to achieve critical acclaim for his productions regularly winning plaudits such as Armin Van Buuren’s ‘Tune Of The Week’,Above and Beyond’s ‘Tune of the Week’ and often featured in Mixmag as their ‘Tune Of The Month’.And with consistent radio play on broadcast stations such as BBC Radio 1 and features on ASOT, Tiesto’s Club Life, Gold’s reach is truly global.With over 1 million plays on Youtube, thousands of singles sold and with army of fans throughout the world, Ben Gold is one of the most in demand DJ’s of the moment with tour schedule testament to his electrifying live appearances.A must see act and now festival favorite Ben Gold’s name is a regular billing alongside Armin Van Buuren, Avicii, DeadMau5, Eric Prydz, Marcus Schulz, Above & Beyond, Gareth Emery & Ferry Corsten to name but a few.Just like his namesake Ben Gold has all of the right chemistry, solid and defining, priceless in pursuit of musical perfection. Witness the transition for his time is now the dawn of Gold is upon us.