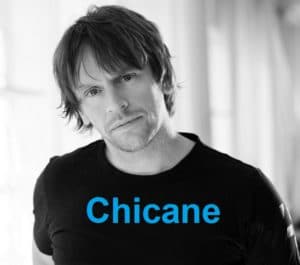 A State of Trance XXL Chicane

Chicane (born Nicholas Bracegirdle; 28 February 1971) is a British electronic musician, composer, songwriter, and record producer. Among his works are singles “Offshore”, an Ibiza trance anthem included in many compilations in both chill-out and dance versions; “Saltwater”, which featured vocals by Clannad member Máire Brennan, and the UK number-one hit “Don’t Give Up”, featuring vocals by Bryan Adams, which became a top ten hit on singles charts across Europe and Australia. Far from the Maddening Crowds, Chicane’s debut album from 1997, is still considered a seminal release among the trance music community, while the second album, 2000’s Behind the Sun, was certified gold in the UK.

In 2007, after the hindrance of an ultimately unreleased album (Easy to Assemble) in the intervening time, the third artist album Somersault was released on Bracegirdle’s independent record label, followed shortly after by a tenth anniversary re-release of Far from the Maddening Crowds which included a new mix of “Offshore” (“Offshore 2007”).

He released his fourth studio album Giants in 2010, with the fifth studio album Thousand Mile Stare following less than two years later, in spring 2012. The sixth studio album, The Sum of Its Parts, appeared in early 2015. In addition, Bracegirdle also worked under the aliases Disco Citizens, producing a handful of less radio-friendly, vocal-less tracks with a stronger progressive house sound.

Working with singer Vanessa St. James and producer Mr. Joshua, Bracegirdle was part of the Mr. Joshua Presents Espiritu project, known for the song “In Praise of the Sun”, released with both English and French vocals. Bracegirdle contributed with executive production on Tomski’s “14 Hours to Save the Earth”. Nick Bracegirdle has also used the alias, Sitvac, to produce a one-time single, “Wishful Thinking.”