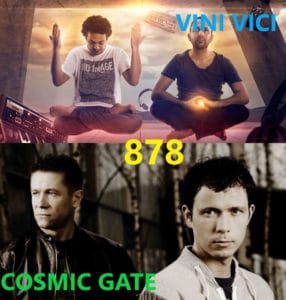 2 Hour – Non-Stop in the Mix with Vini Vici:

Vini Vici is the new project of Aviram Saharai & Matan Kadosh, both well-known and experienced electronic music producers for over a decade.
The concept of Vini Vici was formed by the boys with an intention to express their love for the old school sound, paired with their progressive ideas.
Iboga Records and FM Bookings, widely considered to be the biggest psytrance label and booking agency, were the first to see the potential of the project and invited them to be part of their well respected family, alongside names such as: Ace Ventura, Liquid Soul, Ticon, Captain Hook, Atmos, and the like.

Cosmic Gate was formed in 1999 when Terhoeven (also known as Nic Chagall) and Bossems (also known as Bossi) decided to assemble a new project in the electronic music field.

Their first single was “The Drums”, followed by “Exploration of Space”, “Mental Atmosphere” and their “Somewhere over the Rainbow” remix using samples from the film The Wizard of Oz. However, Cosmic Gate did not become well known until their single “Fire Wire” was released in the UK in 2001.

This Week on A State of Trance 878 hosted by Vini Vici & Cosmic Gate Free Download Live: