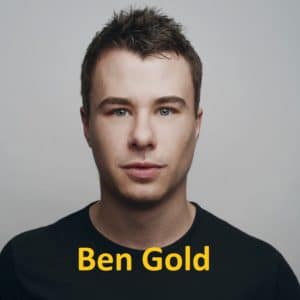 At just 23 years old Ben Gold is one of the most multi talented names in the electronic dance scene. Ben combines a highly acclaimed career as a leading studio engineer with that of one of the brightest young stars in the trance scene, djing at some of the worlds leading clubs alongside world class dj’s who all regularly fill their cd wallets with his latest works.

Ben’s weekdays range from engineering for the likes of Judge Jules to providing killer remixes and mashups for the highly competitive house music scene and its leading labels such as DATA and Hit! Records. Whilst his weekends are spent taking his own unique brand of trance and tech trance to leading clubbing establishments including The Gallery at Turnmills, Peach at Heaven, Honey Club in Brighton and Passion in Coalville.

The legendary days of Peach in London produced many of the worlds leading djs and producers including Ferry, Armin and Tiesto. At only 18 years of age Ben Gold was one of a few to grace the Camden Palace decks with his enviable style of high octane energy behind the decks and a command of equipment unrivalled by most djs turning simple tracks into looped, scratched and reedited pieces of audio excellence. Not just a dj to hear Ben Gold is one of the few you really need to see.

A versatile producer who has seen tracks featured on leading compilations such as Trance Nation Harder and Deeper as well as winning plaudits such as Judge Jules Tried and Tested and Above and Beyond Tune of the Week. Ben’s productions regularly feature on leading radio stations such as Radio 1, Galaxy and on leading radio shows such as ASOT by Armin van Buuren and TATW by Above and Beyond. Ben’s productions are played by djs as far reaching as Armin van Buuren to Sander Van Doorn, Paul van Dyk to Marco V leading to plaudits such as “Ben Gold is a talented young producer and definitely one to watch out for in the future”, by none other than Paul Oakenfold!