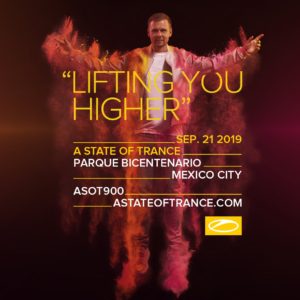 Armin van Buuren and his legendary A State of Trance (ASOT) brand continue to travel around the globe and dropping massive lineups in each city. For the celebration of the 900th episode of the ASOT podcast, the trance crew kicked off the celebration last year with their annual Utrecht event then traveled to other cities such as Miami, Sydney, and recently the Bay Area. Now, ASOT is set to take over the Parque Bicentenario on September 21, and ASOT 900 Mexico is definitely a show not to be missed!

Tickets are flying fast and was already on Phase 3 of General Admission and Phase 2 of VIP before artists were even announced. Now that this stacked lineup was dropped, they are definitely going to disappear. One of the most heavily anticipated artists billed is Ferry Corsten presents System F. Since reviving his old moniker at the past Dreamstate SoCal, Corsten has been making the rounds and taking that classic club sound everywhere and now its Mexico’s turn.

For fans of the progressive trance sound Ben Gold, Ruben de Ronde, and Ashley Wallbridge will fulfill your desires, and for those tech-trance aficionados, John Askew and Will Atkinson are where it’s at. Additionally, hometown heroes and Mexican trance artists Obie Fernandez, Lightform, and Leo Reyes are also on the line-up! Along with Armin van Buuren, this is just a sample of the amazing artists that will be heating up the stages at ASOT 900 Mexico.

Hi ASOT-Team,
will Ben Gold’s set of ASOT Mexico be published ? That would be great. Thank you!

All links are dead.